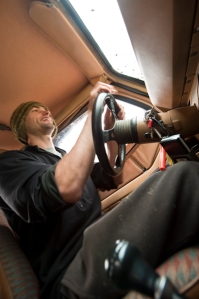 Eric grabs the wheel and explains the folly of seat-belts.

The mountains were calling, so I headed for the hills.  My good friend Eric Tucker and his fiancé Jillian call a quiet little cabin on top of the costal mountains of Carmel home for now.  Having a few days to spare, I thought I would head up and see how my friend was fairing at farming and the slow life.  Being a recent transplant himself, he was determined to grow some vegetables and compost to his heart’s desire.

You see, their goal was to learn from the land, do a bit of farming, and just be.  Eric is a stunt and aerobatic pilot for Team Oracle, and I can see the appeal of having some down time when not pulling 6+ G’s in his little but powerful Pitts biplane.

I was lucky enough to ride along in this stripped down dragster of the air a few months back.  It is nimble as it is quick, and I had the ride of my life.  How many people do you know who’ve commanded a plane the first time they’ve  flown and executed a roll, a 360° flip, and pulled out of an unintentional inverted flat spin…on their first flight? (Goose, you’ll have to punch us out!  I’m pinned against the cockpit!)  I would wager money that I’m the first.

I didn’t really know what to expect heading up to their cabin.  Was it was going to be run down and drafty?  Would they show up in just fig leaves to greet me to their new Eden?  Nah.  Eric met me at the junction where his road heads up 3000 feet to the house he calls home.  He mentioned that I would have to leave my trusty Subaru where the pavement ended and the dirt began.  I was steadfast in protecting my beloved girl.  I protested with, “But it’s a Subaru.”  I can hear mudboggers and Aussies alike snickering under their breath.  I can liken my love and blind passion to when a Brit comes to America and runs out to buy a 6 pack of Budweiser because it is “The King of Beers.”  Oh blind love, you are my bane! 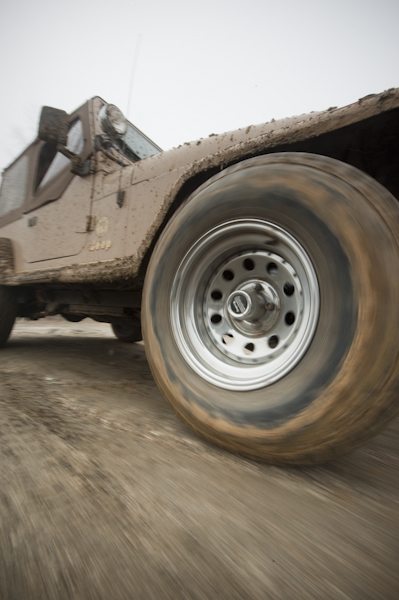 Tires spinning in the mud, Eric rallies up to the summit

Taking a gander at his Jeep with oversized tires, the mud splattered everywhere along the hood, and his quiet pause waiting for my decision, I countered with, “You know, maybe I’ll leave my car here.  I mean, there’s really no reason to bring up two cars anyway.”

“Cool.  Let’s load up your gear!” Eric chimed.  It was the best decision I had made in a long time.

Opening the door, I found Chesta, (aka “Chesta Copperpot!”) our riding companion for the day.  A beagle and lab mix, she’s loyal when in eye-sight, but on her own, has that beagle stubbornness that finds her venturing alone on self guided hikes.  She would prove to be a more than a capable lead when hiking, a good playmate, and a lost child almost everyday.

Bumping Chesta over and taking my seat in the passenger side, Eric threw the transmission into low and popped the gear into first.  We started our ascension through a shroud of fog and mist.  The metal tin-can shell of the Jeep rattled and whirred as the strain of our machine echoed through its skeleton from the hardship of the climb.  I could feel the wheels spinning to gain traction – the mud slinging off in all directions – and just prayed we didn’t go off the side of the mountain.  I looked down out my window and a precipitous drop filled my vision.  Eric, sensing I was visualizing our imminent doom as  our carriage of death bounding down the hillside with our lifeless bodies rag-dolling around inside, piped up with, “Yeah, Jill and I don’t really wear seatbelts.  We figure, if we go over, probably better to be thrown from the vehicle than to ride it all the way down.”  And that was that. 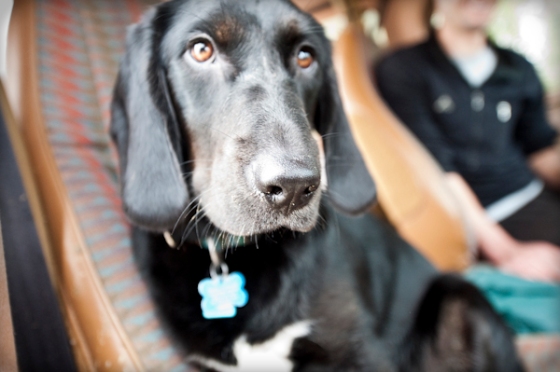 Our trusty companion, Chesta, was game for any adventure.

Stopping half way up, we met a few of his neighbors out for a drive on the mud-slickened road.  They were in their big old truck, just having fun tearing up some dirt and kicking a few beers back.  I looked at my watch.  10:27 AM.  “Sheesh,” I mumbled under my breath, “what a place and time to be drinking, and never mind the activity involved.”

“Why not,” I said.  Grabbing the beer, I popped the top and downed a few swigs.  Uh, beer in the morning when you are not ready for it, isn’t the most refreshing beverage.  But when in Rome…(and hey, I needed a little liquid courage to get up the remainder of this mountain!) 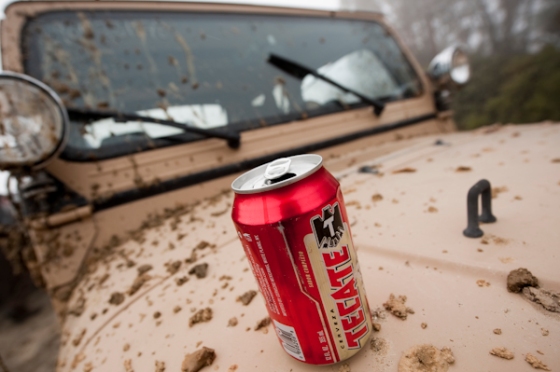 Stopping for a mid-mountain refresher, we met with some new friends.

Arriving at the house, I was happy to have made the long trip.  I unloaded my gear, gave Jill a hug, and checked out my new digs for the next two days.  I was amazed.  The cabin was beautiful, cozy, and clean.  Rustic it was, but it definitely bore the touch of a woman, which is always nice. 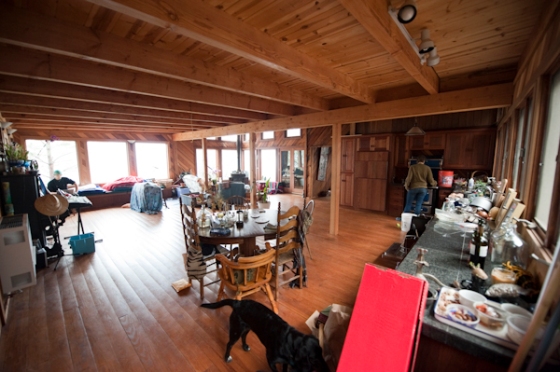 Cozy and Bright, the cabin commanded a gorgeous view to boot.

Without further ado, Eric, Chesta and I headed off for a hike in the woods.  Of course Chesta was out the door like a rocket ship.  We had a great time bounding through the woods as Eric showed and named different flora species en route to the river of an old Native American site where the people would gather to mash acorns for their food.  Stepping atop of a giant boulder, we looked down into three little man made holes.  Worn through time, hands, and pestles, the area came alive with families talking of the day’s events.  Women chatted and gossiped while they mashed acorns and called out to their children who splashed and jumped around in the rambling stream.  The men were off higher up the mountain hunting deer, or fishing down by the coast.  The sun whispered shafts of light through the giant old-growth Redwoods, Madrones, and Oaks.  For a second I was lost in the past, but quickly snapped back into the present.

Of course neither these giants nor the people exist as they once had.  Sadly, industry in its greed forced the people from their land, and cut these majestic trees down for ships, fence posts, and whatever else would turn a profit at the time.  However unsettling it is to you, being miles back in this rough wilderness, I couldn’t help but think what a marvel it was that people actually came this far back, cut these massive trees down, and had the strength and ingenuity to get them to the coast.  That’s not to say I respect their decisions, but their resolve is another matter. 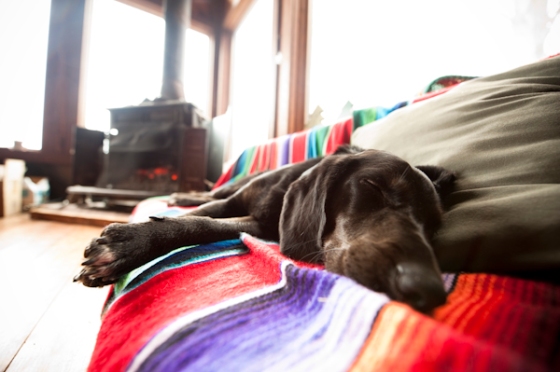 Chesta, resting after a nice hike.

Nibbling on miner’s lettuce as we trounced back to the house, I breathed deep and let the cool forest air wash over my lungs.  At the bottom of my exhalation, a silence enveloped me and the earth was quiet for just a second – An absolute quiet.  These forests are places of healing, and I felt so refreshed once back at the cabin.  Chesta, content as well, retired to her little Hobbit-sized settee for a nice long nap.  I followed suit, and drifted off thinking what a gorgeous life I am living.

In the next chapter of this story, I’ll touch on some funny anecdotes and good people.