Surfing is a sport that allows you to disconnect.  When your mind is abuzz with thoughts and worries from the day, you can make your way to the nearest lineup, paddle out, and every distraction floats into the ether as you bob up and down with the pulse of the ocean.  You have so many things to worry about other than what’s going on in your life.  Is that an outside set over the horizon?  Am I drifting south with the current?  What was that swirling boil over there?  Why did the water just become so warm?

Now your average surf spot is along a beach with sand and the whole nine yards; it’s a place to relax.  Occasionally you’ll want to ride next to a man made structure – a pier reaching out towards the south pacific or a jetty to destroy control the movement of the sand that shifts around with the currents – they offer different characteristics and create distinct waves.  It’s almost a little buffet for a surfer.

Do you want a hollow wave with power that’s relatively short?  You can head to a pumping little beachbreak.  Are you in the mood for a longer ride with a smooth and groomed face?  Drive to a pointbreak and reap the rewards of one flawless wave.  Each wave is singular in its qualities, flaws, looks, and feel.  Anyone who has spent time surfing a wave can isolate it from a pile of pictures and shout, “That’s Mundaka!”  To your surprise, they’ll be correct.

But in my years of surfing, I have never seen a surf spot quite like Fort Point.  In the heart of San Francisco, tucked back in the corner of the southern entrance is a point of land that just barely juts out.  With all the water moving from tidal action, sandbars naturally build up, and at Ft. Point, a nice little pointbreak has formed.  But having the correct bottom contour is only part of the equation.  Now you need swell and the proper swell angle for a break to come alive.

Inside the mouth of the entrance, Ft. Point requires a decent size swell for wave energy to wrap in and break.  Not only does the swell have to be powerful, but the angle of swell has to be right on the money (within a few degrees to break properly.)  As I pulled up last week, to my surprise, Ft. Point was going off.  I grabbed my camera gear and wished I had my 6’3” shortboard instead.  As I imagined myself with my board slung under my arm, I got to thinking, “Can a place this busy create a relaxing experience?”  Ft. Point definitely tests the threshold. 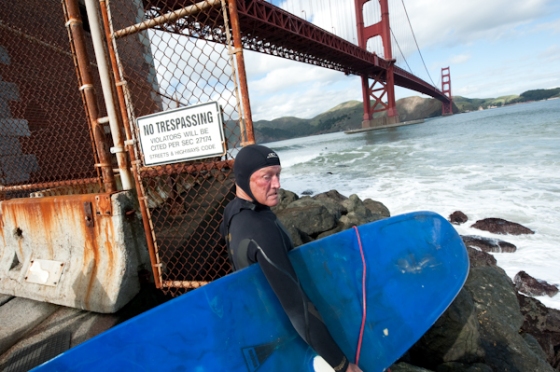 You want a man made structure to surf against?  This is the place.  It doesn’t get any bigger or grander than surfing next to and under the Golden Gate Bridge.  Its red arms reach across the opening of one of the world’s most amazing natural harbors.  In the meantime, China’s goods constantly stream forth via gigantic Maersk shipping liners three times the size of a football field, docking and dumping their goods, filling a local Wal-Mart near you.  The constant drone of cars and trucks whisking people to and fro is also audible through the girders and concrete holding the bridge together.  From the lineup, you can turn around and gaze upon the skyline of a concrete jungle.  Does this sound relaxing? 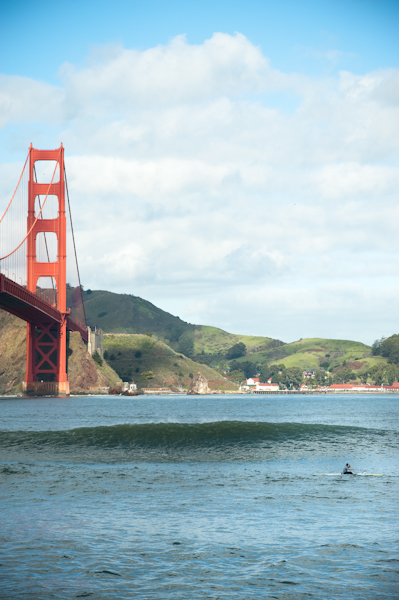 To top it off, Ft. Point isn’t exactly the most “friendly” of surf spots.  Localism does exist, but in my opinion it’s a dying trend.  Especially since the area is under federal jurisdiction, which means they prosecute to the full extent of the law.  A few years back one local learned first hand, as he picked a fight and punched another surfer.  When he was prosecuted, violence pretty much stopped altogether.

In this new age of technology, nothing is sacred.  With a few clicks of a mouse, you can find exactly when and where to go depending on the swell via excellent wave forecasting and real-time web cams.  Ft. Point is now just another spot for surfers to choose from, but it wasn’t always so.  Thus it was protected fiercely by those who called it home. 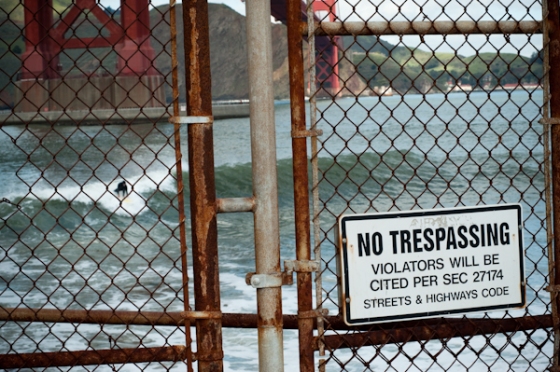 Snapping pictures for about an hour, the tide started to come in and the wave was losing its punch.  As I packed it in, I looked around.  I could hear a truck’s tires humming along the bridge above.  The wake of a huge tanker splashed against the shore.  Crowds of tourists were along the shoreline.  All of this was going on, and I thought, “This is still a damn fine place to surf.”

Next time I will bring my board.

4 thoughts on “Surfing Under the Red Giant”